Christmas twist to a simple cake

Apples are a must in our house, we both love them. Fresh, baked, in an apple sauce or in a classic apple pie! A couple of days ago, I made a easy, simple but delicious apple cake. The Holiday mood was in the air and I was listening to some favourite Christmas songs.Watching our sweet little kerstboom and our holiday decorations, serving the cake in a simple way, just didn't seem enough. So I decided to give it a Christmas feeling!

Beaty lies in the details!
And these details are in your house already, you don't have to go searching for cake decorations, special frosting or anything.
(Although I honestly adore all these super cute cake decorations!!) 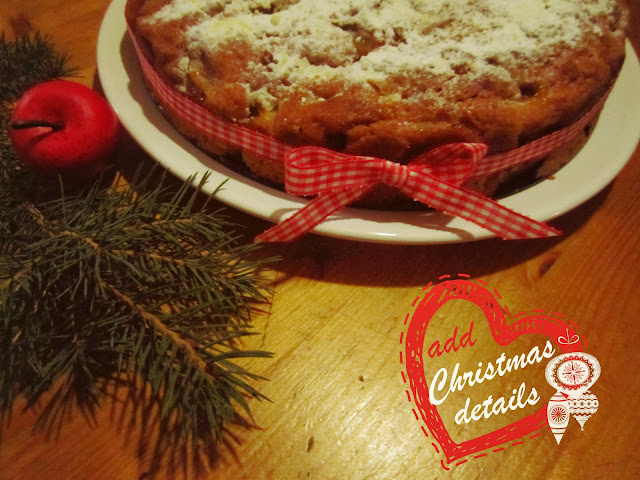 Begin by adding some icing sugar on the top of your cake.
Who can not relate Christmas holidays with snow? And if your cake is a chocolate one, the contrast will be even better. If you don't like sugar you can quickly make a white frosting which is also super easy or sprinkle some coconut flakes.

Then tie a red plaid ribbon around your cake. Make a nice bow in the end. Already looking fantastic!

Of course you can decorate with a variaty of candies or tiny ornaments! It depents on your creativity and time! But you can also keep it simple instead.

Finally give some attention to the table decorations with a little branch of pine and some christmas ornament.
And voilà your dessert is more christmassy than ever! 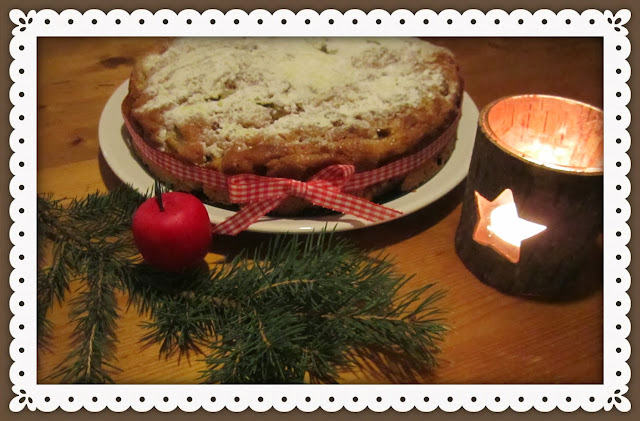 How do you like to decorate your cakes for Christmas?
Happy holidays!!
Panagiota
Posted by panagiota at 11:36 No comments:

All the moments in my life have a song playing in the backround,
usually I´m the only one to hear it.
Τhe moments that have no song, have a pause. And my (so loved)music teachers have taught me how important and powerfull pause is!

Every Christmas so far had a different soundtrack/mix. And usually I find out the full list of songs after the holidays are over.
Songs filled with love, warmth, family moments, sweet and spicy, smiles and all sort of feelings.

Here are some holiday playlists I love:

Best of Christmas
by the adored blogger Sarah Kieffer who gave me the idea for this post.  You can find her here and there.

I've got my love to keep me warm -old fashioned, vintage, jazzy, warm and fuzzy


Can't wait to see what this holiday soundtrack will bring!
Happy Holidays everyone! 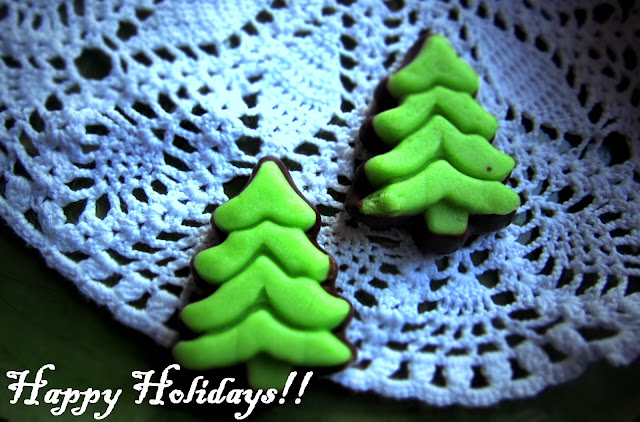 (by the way, these sweet little Christmas trees are chocolate covered marzipan yummy trees... oh my do I love Dutch sweets..!)

Posted by panagiota at 18:45 No comments:

Somewhere between studying for my Dutch lesson and getting ready for my brother's visit from Greece, November has gone and Christmas mood has arrived in our house. :) 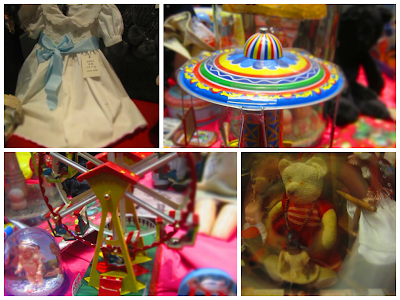 It was a great month and from the first week of December, I can tell it’s going to be a very special one too! The weather is getting colder and colder. It was also snowing a little bit on Friday, but Dutch don´t acknowledge this white fluffy things falling from the sky as real snow! So I guess I´ll wait a little while till I get to see the dutch snow in Utrecht.
The past week despite the really windy day, Sinterklaas passed by our house and left some pepernoten en chocoladeletters! For those not familiar with the three Dutch words in the last sentence, please check this post.

Among other interesting things, including baking a lot, celebrating our parish feast, getting to know new extraordinary people better, visiting new areas in the Netherlands and Belgium and meeting super cute babies, last month I had the joy of attending a Creative mornings talk in de Ruimte,Utrecht, where I met new interesting people while eating yummy breakfast together.

The speaker was Stephen Hay who enlightened us with a really nice talk about bravery and getting out of your comfort zone. Thank you Stephen!
Memorable quotes of the morning:

December's Creative Mornings theme is make, but unfortunately there will be no talk in Utrecht.

Maybe I should apply and talk about our Double Crochets project.... just kidding.


Speaking of Double Crochets, my sister Marietta, who continues our blog and brand, back in Greece, had a very nice interview where she talks about her experiences, being part of Double Crochets and where does she gets inspiration for all her beautiful creations. (If you don’t read Greek, try using google translate.) When the question was why she is now alone, there came an answer which I love:

-You started out as 2 , but from what I understand , you are left alone. Was there redefining of objectives? 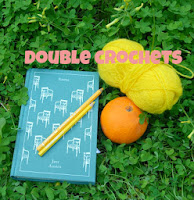 -Yes we started together, but I was not exactly left on my own! In fact from two we became four, as we both got married this past summer.
My sister moved to the Netherlands and I moved to Halkida, which inevitably brought redefining in many things including objectives.
The [.....] it was not easy and we really miss each other. Marietta, Double Crochets

Meanwhile we had a weekend visit to Gent where we celebrated Saint Andreas feast. A walk through this beautiful city led us in a pub eating Belgian broccoli soup with brown bread.
I can't even start talking about the Belgian beers!  In one of the streets we stumbled upon a vintage toy shop (the collage in the beginning of the post), with so many special old toys. Unfortunately it was already closed when we found it, but next time, I'll know where it is. 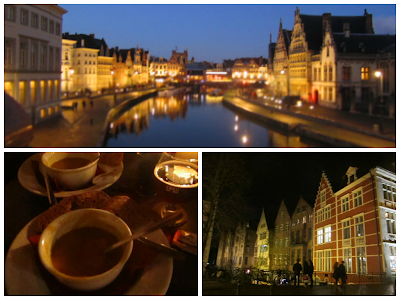 Christmas gifts and crafting go hand in hand, I’m now preparing some sweet Christmas gifts, packages and cards for friends and family all around the world. :) Last week my mum pinned a cute crocheted star on pinterest which gave me the idea to create some mini crocheted gifts.
The first one was already given as a gift along with a bottle of my new favourite Belgian beer. 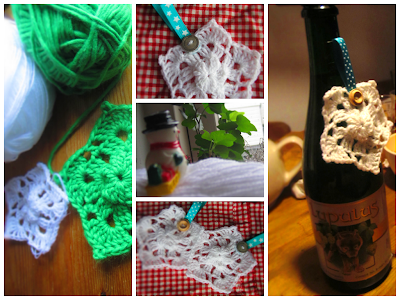 There are more and different crocheted or not, gifts to come!
Also it's been so long since I last crocheted!! I didn't realise how much I miss and love it!!
If you are also interested in making this cute crocheted star you can find the pattern here. 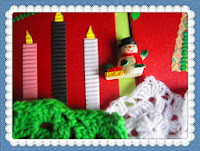 For some inspiration for Christmas gifts and ideas for crafts do come for a visit at my pinterest Christmas board.

And how about you, how are you getting ready for Christmas?

A crochet star pattern for Christmas

This is a rather old, simple and known pattern. With some alterations of mine, I share it with you. Enjoy! 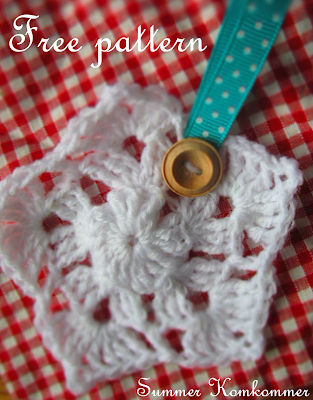 Pop corn treble stich-Work 5 treble crochet stitches in the same stitch. Drop the loop from your hook. Insert your hook from front to back under the top 2 loops of the first tr crochet of the group. Grab the dropped loop with your hook and pull it through the stitch.

Picot-Chain 3.Insert your hook in the third chain from the hook. Yarn over and draw the yarn through the stitch and through the loop on the hook. 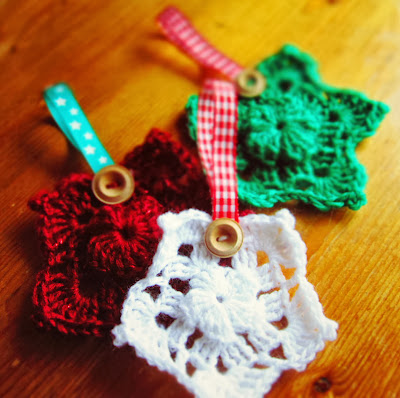 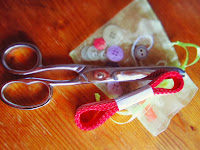 Your star is ready, you can use it as an ornament by adding ribbon and a button, or use it for decoration of gifts or cards. 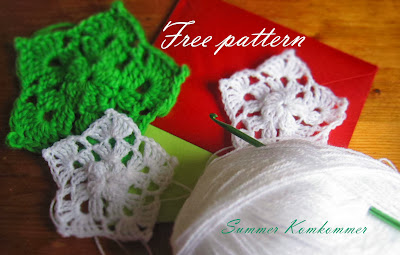 Posted by panagiota at 12:36 No comments: 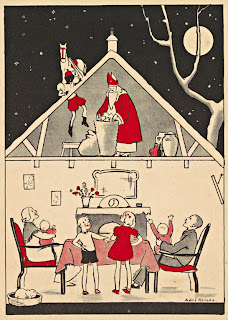 Who is Sinterklaas, who are zwarte Piet and what is a pepernot?


Sinterklaas and his feast day is a huge thing in the Netherlands! His annual arrival and parade in all the cities of the Netherlands and the traditional festivities that follow are amazing! Sinterklaas is the reason why Santa Klaus exists. His true origin of existance is Saint Nikolaos (who was an actual person and honoured as a saint in the Orthodox church).
Every year everyone is waiting for him to come from Spain (no one really knows why he chose to live in Spain but maybe the Spanish domination over the Netherlands in the past has something to do with it).
He even has his own website-journall (The Sinterklaas Journal) with live news covering his every move.
Zwarte Piet literally means Black Peter, they are Sint’s helpers. The last years Zwarte Piet is the subject of depate in the Netherlands, about how racist the whole idea is. 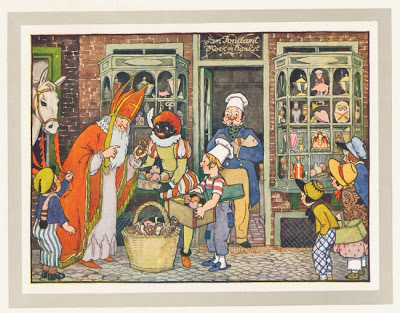 Once Sint arrives in every town, children lay out their shoes before bedtime, along with water and a carrot for his horse, in the hopes that there will be a gift left there by morning.
The very sweet kids are usually rewarded with chocolate letters and marzipan while the naughty anxiously wait to see if they’ve been given coal..

Although the feast of Saint Nicolas is celebrated on the 6th of December, the evening of 5th December is the main gift-giving occasion during the holiday season in the Netherlands.
Called 'sinterklaasavond' (Sinterklaas night) or 'pakjesavond'  (presents night), Sint drops off a sack full of gifts on the doorstep before heading back to Spain. Every present from Sinterklaas, has a poem that is written especially for each recipient.

All the children but also the adults are enjoying this feast day, although some find it too childish. For me it's all new, and I can honestly say, I like it!! I knew saint Nikolaos already and it's nice to receive his gifts!!
This year Sinterklaas visited our house (maybe while I was sleeping) and left inside my boots, some pepernoten (small spiced biscuits) and a lovely chocolade letter.

You can find many nice songs, images and printables in this site (all in Dutch).


In our parish for Sinterklaas gifts, the children of Sunday school prepared some amazing christmas ornaments and cards to help the Romanian Valea Plopului orphanage.If you want to help, you can visit their facebook page.
Posted by panagiota at 17:57 No comments:

the story behind summer komkommer 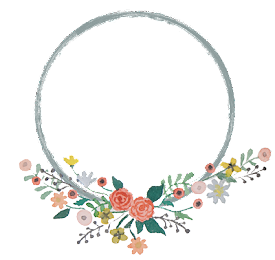 As time goes by..